Homes for Sale in Beverly Hills 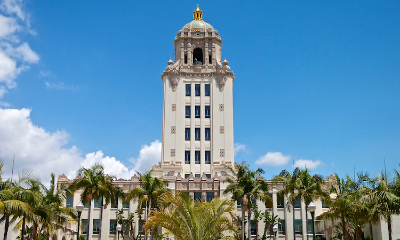 Most people associate Beverly Hills with high-end shopping and the gently winding tree-lined streets of "The Flats," but these areas only comprise a third of the city. Colloquially, "Beverly Hills" is lumped together with "Beverly Hills Post Office," which technically falls within the city limits of Los Angeles. You will find real estate listings on this page for both areas.

This page contains all Beverly Hills real estate but you can also view homes over $2M by visiting the Beverly Hills luxury homes page.

Beverly Hills is an independently incorporated city located within Los Angeles County. Often associated with the famous zip code of 90210 since it contains the city's most expensive and exclusive enclaves in the Los Angeles area, Beverly Hills also includes the zip codes of 90209, 90211, 90212, and 90213.

The City of Beverly Hills is bordered by Bel Air, Holmby Hills, the Los Angeles Country Club, and Westwood/Century City to the west; Beverly Hills Post Office/Beverly Crest to the north; the Hollywood Hills (the Bird Streets, Doheny Estates, and Laurel Canyon), West Hollywood, Beverly Center/Miracle Mile/Beverly Grove, and Carthay to the east; and Pico-Robertson/Beverlywood Vicinity to the South.

Beverly Hills was incorporated in 1914 by a group of investors after first buying the land for oil prospecting. Although they found some oil, the amount found did not justify their investment. When they found water, the investors decided to subdivide and sell off plots of land. From the outset, Beverly Hills was designed with a vision of a unique and perfect no-expense-spared luxury community. The city's first engineer, Arthur Pillsbury, recalled a discussion with investor Charles Canfield: "Canfield was the man that insisted everything be done in the best possible manner regardless of expense. It had to be perfect.... Canfield's instructions were merely this: Make the best subdivision that man can make, regardless of cost."

The investment group, organized under the name Rodeo Land and Water Company, hired Wilber David Cook, Jr., a landscape architect who had worked for the famous Fredrick Law Olmstead, to draft a master plan for the community. The street plan, consisting of a series of gently curving streets, was insisted upon by Percy Clark, a Realtor who would eventually show houses in Beverly Hills using a horse-drawn carriage. A horticulturalist, the first to successfully transplant large trees in Southern California, was brought in and insisted on using one type of tree per street to create a distinctive and harmonious look.

Cook is credited with the layering of Beverly Hills into three distinct sections. Estates for the wealthy were planned for the largest lots situated in the foothills north of Sunset Boulevard, with "the flats" laid out on the flat land south of Sunset Boulevard. A rail line that ran along Santa Monica Boulevard divided the flats, with the area "north of the tracks," located between Sunset Boulevard and Santa Monica Boulevard, projected to attract middle-class residents. The area often dismissed as "south of the tracks" was formally called "Beverly." The smaller lots in Beverly were less restricted, built on more urban-sized blocks, and sold to workers who were to serve the residents living north of Santa Monica. Over time, some of those viewed as lower-class became quite wealthy as the land south of Santa Monica developed into the Beverly Hills business district and land values increased drastically.

Cook's plan for the city has remained mostly intact to this day with the largest concentration of apartment buildings south of Wilshire and an increase in lot size and home prices as you go north into the foothills of the Santa Monica Mountains, with one exception being the smaller lots (but large land value) in the Trousdale Estates neighborhood that was developed after the Doheny Ranch was subdivided. The development contains many mid-century architectural masterpieces by renowned architects such as Frank Lloyd Wright, A. Quincy Jones, Harold Levitt, Wallace Neff, and Paul R. Williams.

The first house in Beverly Hills was built in 1907, but sales were slow and it was not until 1914 the subdivision had a large enough population to incorporate as an independent city. Rodeo Land and Water Company marketed their land with a brochure titled, "Between the City and the Sea." Among other sales pitches, the brochure claimed future development of a subway line to Downtown, making the trip to Beverly Hills a 15-minute journey (a plan that never developed and is funny considering it would take until 2010 before Beverly Hills residents would support mass transportation within the city). With initial sales slow the Rodeo investors began building spec homes so the land did not look undeveloped and offered a ten percent discount to anyone paying cash and a ten percent discount to anyone starting construction within six months.

The success of Beverly Hills is attributed to a few key occurrences in its early history:

Notable and Celebrity Beverly Hills Residents (Past and Present):