The Most Expensive Neighborhoods in Los Angeles 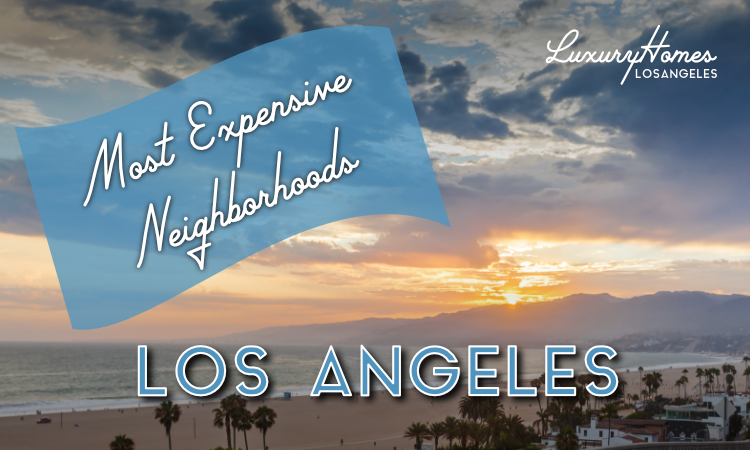 Los Angeles’ most expensive neighborhoods are found in two principal areas: on the ridges of the Santa Monica Mountains and along the shores of the Pacific Ocean.

The Santa Monica Mountains stretch on an east-west axis from the Hollywood Hills to the Oxnard Plain and run parallel to the Pacific Ocean and Los Angeles Basin. As one drives from the basin up into the foothills and deeper into the verdant and lush canyons, the bustling metropolis of Los Angeles fades away. The major hillside areas like Beverly Hills, Bel Air, and Brentwood face south, so many homes enjoy an abundance of sunshine and unparalleled canyon and city views. At night residents can gaze at stars or the flickering lights of the city below.

While the coastal areas of Santa Monica, Venice, and Malibu contain pricey luxury homes, Malibu takes the prize for the most exclusive enclaves. Malibu is much more rural and spread out, making it suitable for horse properties and compounds, especially in the Malibu Hills. However, given the draw of oceanside living, properties in Malibu's beachfront communities are tighter and prices dearer.

Though the Los Angeles area is massive and urban, it contains some of the most expensive cities in California. Luxury properties here are characterized by large parcels, privacy, and verdant surroundings. For mansions and luxury homes in Los Angeles, well-manicured (and sometimes lavish) landscaping is the norm, not the exception.

Let’s drill in further to find the most exclusive subdivisions and enclaves in the Los Angeles area. The list below includes the name of the neighborhood followed by the median home price, i.e., Neighborhood / Median Price. 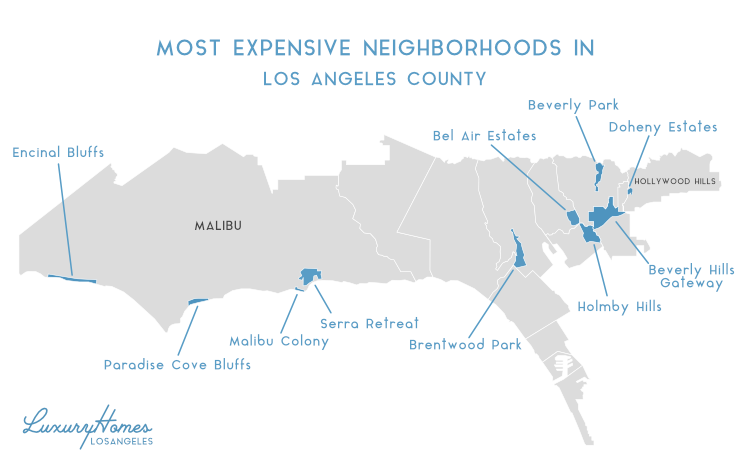 Paradise Cove Bluffs is the most expensive neighborhood in Los Angeles County and the priciest of the twenty-one oceanfront communities in Malibu. Each home in the neighborhood has private beach frontage.

As with most beachfront enclaves, the lots here are narrow and stretch from the PCH to the shores of the Pacific Ocean. However, there is plenty of room to accommodate guest houses, tennis courts, and pools. The sprawling and finely manicured yards here have custom landscape designs.

The neighborhood faces south, so homeowners enjoy plenty of warm sunshine and panoramic views of the ocean, coastline, and Catalina Island. Homes sizes average 5,000 square feet. The smallest is 2,024 sq. ft. and the largest is 13,693 sq. ft.

Beverly Park is relatively new when compared to other exclusive communities in Los Angeles. Originally, the neighborhood was to be a golf course and country club, but the developers thought the better of it, and the project wound up as estates, completed in 1990. Per the HOA rules for both tracts, the size of homes built here must be at least 5,000 square feet. The largest houses here approach 40,000 square feet.

From its inception, Beverly Park has been not only one of Los Angeles most expensive neighborhoods, but one of its most famous. The community is home to many notable residents, and the real estate activity here is frequently covered in both journalistic and tabloid press outlets.

The Encinal Bluffs beachfront neighborhood is in Western Malibu near the Ventura County line. Its remoteness creates one of Malibu’s most secluded, private, and tranquil enclaves. Its home prices make it one of the region’s most exclusive.

The estates here are perched on the hills above the Pacific Ocean, each with stunning panoramic views of the coastline, Catalina, and San Nicolas Islands. The lots are large and
every property has beach access.

Encinal Bluffs has been a longtime favorite among celebrities and business moguls. One Frank Gehry-designed home, “The Micheal B. Hendrix House,” is a pared-down, more affordable version of his Gunther House design and was completed in Encinal Bluffs in 1983.

Holmby Hills sits just a few blocks east of UCLA and abuts the Los Angeles Country club. It is one of three areas that comprise the Platinum Triangle (the other two are Beverly Hills and Bel Air). Despite its urban surroundings, Holmby Hills sports massive estates that contain 10,000+ square foot mansions. Over the years, Holmby Hills has been home to numerous directors, A-list actors, and industrialists, too many to list.

However, Holmby Hills is not just known for its famous residents. Name dropping homes like Spelling Manor, Playboy Mansion, Carolwood Estate (once owned by Walt Disney) would not be out of place in casual conversation among jetsetters. Even streets here, like Mapleton Drive, are known worldwide, especially to architecture and aficionados.

Serra Retreat is a gated community on the landside of Pacific Coast Highway (PCH-1) near Malibu Creek. The neighborhood is one of Malibu's more bucolic settings along the coast; numerous trees and flora provide a lush environment.

In the lower Malibu Canyon portion of the enclave near Malibu Creek, homes are nestled within a wooded glen. The elevated parts of the neighborhood consist of estates perched on undulating hillsides, each with exceptional ocean views.

The community gets its name from Serra Retreat, a retreat and conference center run by Franciscan Friars. Their compound sits on the highest hill within the neighborhood’s boundaries.

Bel Air Estates is the original Bel Air neighborhood just north of the UCLA campus. The main entrance is at the intersection of Bel Air Road and Sunset Boulevard. The entrance gates are not secure, but there is a heavy security presence patrolling day and night. Large hedges, walls, and foliage generate plenty of privacy for each residence.

Alphonzo E. Bell developed the tract as a 128-home subdivision under the name Bel Air Estates Residential Planning District. The lots here are massive when compared to other parcels in Los Angeles County. Given each parcel's available space, sprawling lawns, backyard pools, terraced gardens, and tennis courts are common.

Beverly Hills Gateway is the northernmost neighborhood within Beverly Hills’ city limits. Homes here sit on the transitional slope of the Santa Monica Mountains between The Flats and Beverly Crest.

The community's layout defies the traditional urban grid system; the area is replete with lazily curving, wide, tree-lined streets. Homes here are set back from the street on oversized lots that provide large -- always well-manicured -- front lawns. More often than not, backyards will have pools. Tennis courts are also common.

Causal film and entertainment buffs know the Beverly Hills Gateway area, if not by name, then by the iconic Beverly Hills Hotel. Tourists and locals alike enjoy its Polo Lounge and spa.

Malibu Colony is a gated beachfront community in Eastern Malibu. It is the closest Malibu Gated community to Los Angeles. It thus is a popular neighborhood for A-list entertainers and movie moguls who prefer to live a tad closer to studios and agencies. In fact, Malibu Colony started as Malibu Motion Picture Colony in 1926.

Because the lots are small and narrow, shotgun home styles dominate the scene. However, most homes borrow elements from Spanish, Mediterranean, and contemporary architecture.

In Malibu Colony, homeowners get the extra convenience of living across the Pacific Coast Highway from Malibu Village, a shopping center with a collection of boutiques and eateries. This commercial area has a unique way of presenting an upscale retail experience combined with everyday services like a gas station, grocery store, and cinema.

Brentwood Park sits on an apron of the Santa Monica Mountains on Los Angeles’ Westside. Advertising for the neighborhood began in 1906, and it was the first community built off San Vicente Boulevard. Brentwood Park is where the wider area of Brentwood gets its name.

The neighborhood was designed after Golden Gate Park in San Francisco. The visual character of the community is deliberate. Rules governing minimum lot sizes, a prohibition of businesses, and required setbacks between streets and homes create large front yards. Lush landscaping is the norm here.

Moving about the area takes one along tree-lined, gently curving roads that periodically wrap around traffic circles. Even though Brentwood Park is a part of the bustling city of Los Angeles, it has a certain rustic charm. The original homes here resemble country-like estates.

The Doheny Estates enclave is nested (pun intended) within the larger Bird Streets neighborhood above the Sunset Strip. Homes in Doheny Estates sit on terraced lots with jetliner views of the Los Angeles Basin. The predominant architectural style is Modern, but a few other styles dot the hillside.

For well-heeled home buyers looking to be close to world-class shopping and dining along Sunset Strip, Beverly Hills, and West Hollywood, this is the place to be. The proximity to motion picture studios and entertainment agencies is also an appealing factor for folks working in show business. 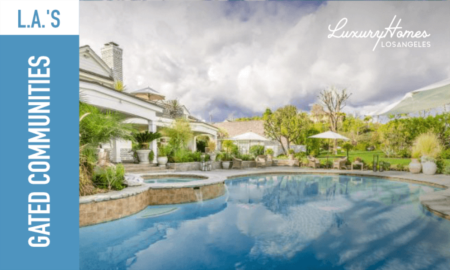 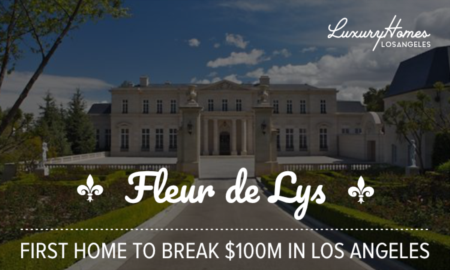 How hot is the ultra-high-end real estate market in Los Angeles? Hot enough for a home to break the elusive $100 million ...