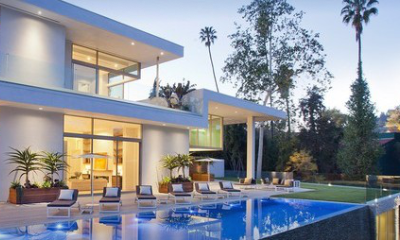 The community straddles Sunset Boulevard, borders the Los Angeles Country Club, and is home to two parks: Holmby Park and De Neve Square Park, the site of Elvis Presley's famous organized touch football games when he lived in Los Angeles during the 50s and 60s.

Holmby Hills shares its borders with Bel Air on the north; Beverly Crest, Beverly Hills, and Los Angeles Country Club to the west; and Westwood to the south and east. The area of Holmby Hills north of Sunset Boulevard is located within the 90077 zip code while the 90024 zip code is used the area of Holmby Hills south of Sunset Boulevard. The neighborhood is rich with public parks, lush landscaping, and English-style street lamps that were installed exclusively to the neighborhood in the 1920s.

Holmby Hills was first developed by Arthur Letts, Sr. and the Janss Investment Company, Lett's son-in-law's family business which had over two decades of experience in the subdivision business in and around Los Angeles. In 1919, Letts had purchased 3296 acres of what was Wolfskill Ranch and set aside 400 acres for an estate section that would become Holmby Hills, an area whose name he took from his family home in England and had already used in naming his grand Hollywood estate Holmby House. Letts kept a stake in the land but let the Janss family oversee development, a task they carried on after Letts died in 1923.

The development of Holmby Hills was handled differently than its Platinum Triangle counterparts, with less restrictive deeds on who could and found not buy and what could be built. In fact, the only notable restrictions were those banning commercial structures, requiring minimum setbacks, and forbidding subdividing lots for fifty years. The developers had faith that anyone with the means to purchase in their community would strive to meet a certain standard. As if to hedge their bets on the standards buyers would strive for, the first homes in Holmby Hills were built by two of the Janss brothers, both moving in before the first lots were sold publicly. The homes they built set the standard for style, expense, elegance, and grandeur prospective estate buyers were expected to equal in their own homes.

The Janss Investment Company tried to further set themselves apart from their competition with subtle comparisons like touting Holmby Hills sites as offering elevated views "without steep grades" and by practicing discretion, with press releases rarely naming anyone who bought a lot.

Notable and Celebrity Holmby Hills Residents (Past and Present):