Homes for Sale in Venice, CA 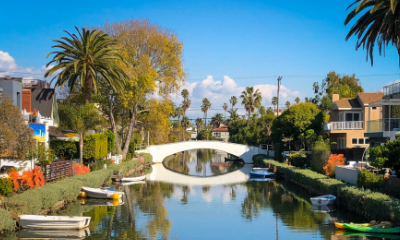 Search all Venice, California homes and real estate listings. Venice is an oceanfront neighborhood on the Westside of Los Angeles. Venice is a diverse neighborhood that is in transition as gentrification mixes with the charming eccentricity and artistic spirit that have defined the neighborhood for decades.

The transition (and growing pains) are most evident in the juxtaposition of Venice real estate styles ranging from the older California Bungalows and Craftsman homes to the new architectural Contemporary and Modern homes sited next to (and towering over) the smaller homes.

Venice is located within the 90291 and 90292 zip codes and is bordered by Santa Monica to the north; Palms-Mar Vista and Culver City to the east, Marina Del Rey to the south, and the Pacific Ocean to the west.

In a coin flip, Abbot Kinney, who made his wealth from tobacco, won a plot of marshy land from his former partners in real estate development. He envisioned what he called "Venice of America" for the land and dug miles of canals to drain the marshes, so it could be developed for residential use. Kinney founded Venice of America in 1905 as an oceanfront resort. During his lifetime, Abbot Kinney governed the city according to his vision, but things fell apart after his death in 1920. The city fell into disrepair and was unable to keep up with city services and a growing population and willfully ended its status as an independent city when annexed by Los Angeles in 1926.

After the City of Los Angeles annexed what had been equivalent to the Disneyland of the day, it tried to reshape the resort in its own image, paving over canals to create additional roads and closing Venice's amusement piers as soon as possible. Discovery of oil and the resulting 450 oil wells that soon sprang up contaminated the remaining canals with drilling waste. After decades of neglect, Venice became the "Slum by the Sea" and its run-down housing resulted in low rents that attracted many immigrants and counterculture artists including those from the Beat generation.

Today, Venice has retained its artist-friendly history and is known as an artistic beachfront community.

Attractions in Venice include its wide beach, the Abbot Kinney shopping district, which was recently named the "The coolest block in America" by GQ Magazine, and a weird-yet-charming bazaar-like promenade along Venice Beach that is known as "Ocean Front Walk" or "the boardwalk" and includes world-famous Muscle Beach and the renowned basketball courts featured in the movie "White Men Can't Jump."

Many of Venice's houses have their principal entrances from pedestrian-only streets and have their addresses based on the footpaths, with alleys in the rear of the homes allowing for automobile access. Roughly 620 single-family homes are located on these inland walking streets.

Notable and Celebrity Venice Residents (Past and Present):

If you're looking to buy a home, contact our Venice Realtors®; we're the LOCAL experts and can answer all of your Venice neighborhood and home buying questions.

If you're planning to sell your home in the Venice area, our listing agents can provide a list of houses recently sold nearby (a.k.a. comparables) and up-to-date Venice real estate market data.