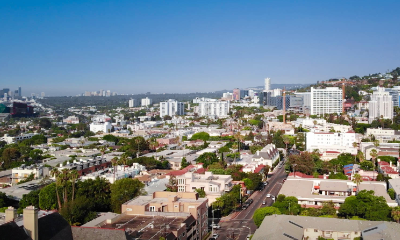 Search all West Hollywood homes for sale. West Hollywood is an incorporated city located within Los Angeles County. Nicknamed "WeHo," the city is known as uniquely compact community with lots of amenities. West Hollywood, with its central location, is a destination for Angelenos and visitors seeking world-class entertainment and nightlife, dining, and shopping.

West Hollywood real estate is comprised mainly of multi-unit buildings, ranging from the grand historic courtyard buildings along Fountain Avenue to the dingbats lining nearly every street, as well as single-family homes with Spanish influences. Be sure to register for a free account so that you can receive email alerts whenever new West Hollywood properties come on the market.

West Hollywood is located within the 90069, 90046, 90048, and 90038 zip codes and is bordered by Beverly Hills to the west, the Hollywood Hills neighborhoods of Doheny Estates and Sunset Plaza, to the north, Hollywood to the east, and Beverly Center/Miracle Mile to the south.

The land that would later become West Hollywood was established as the town of Sherman, named for its founder Moses Sherman, a land developer and railroad magnate who ran the Los Angeles and Pacific Railway. The town of Sherman housed the railway's main yard and was became home for many of the railroad employees. During this time, the community began to earn a reputation as a loosely regulated place for eccentric people wary of government interference, a reputation that was further solidified during its liquor-friendly policy during prohibition. The City of Los Angeles attempted to annex the town on several occasions, but the town declined on each occasion and remained under the governance of Los Angeles County. In order to align itself with its neighbor that was garnering international recognition, Sherman, in 1925, adopted West Hollywood as its informal name, a designation pioneered by the West Hollywood Realty Board a few years earlier.

West Hollywood was incorporated in 1984, in large part, because Los Angeles County was planning to discontinue rent controls. Being an area densely populated with renters, a group of the renters banded together and voted to incorporate as the City of Los Angeles. The new city immediately adopted one of the strongest rent control laws in the United States.

West Hollywood's irregular shape came about as West Hollywood was formed from the unincorporated area of Los Angeles County that was not already part of the surrounding areas.

One of the appeals of West Hollywood is a dense urban form with small lots and mixed land use. The commercial corridors with boutique shopping, dining, and nightlife are focused on Santa Monica Boulevard, the Sunset Strip on Sunset Boulevard (which is technically part of West Hollywood), La Cienega Boulevard, the quaint Melrose Place, and the Avenues of Art & Design (centered around the Pacific Design Center) running along Melrose Ave, Robertson Boulevard, and Beverly Boulevard.

West Hollywood is a socially progressive, even for being located on the Westside of Los Angeles. Examples include:

Notable and Celebrity West Hollywood Residents (Past and Present):